And speaking of dancing… the POGOGO SHOW is coming your way! Finally the superspecial funball of a KIDS SHOW has found it’s fuzzy feet. With a second performance of this new kids show heading to the Gold Coast… announced for HOTA, Home of the Arts on the Gold Coast, SAT 12 JAN 2019.  And the […]

Seems Ballarat’s stalwart supporter of live music KAROVA LOUNGE has had us on their original bucket list for nearing on 15 years or so now. We never served their better interests. Jeez even much loved Fugazi graced the space in years prior when it was a YMCA. So now… we finally get to honour that inaugural […]

Hey so as the dust settles from the Civic Sounds high voltage fun that was AC/DC lane… we now sleigh Melbourne and Ballarat with a double blagger of special intimate xmas shows!  Bring on the missle toes! SAT 22 DEC melbourne JOHN CURTIN HOTEL plus Damian Cowell’s Disco Machine & U-Bahn tickets from http://johncurtinhotel.com/ Holy Moly! The […] 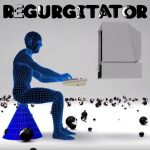 REGURGITATOR have access to the net… Get with the packet switching on this latest hypertexture from Regurgitator – the simpler, shorter, self-ordered, diverse, collaborative, confessional soundtrack for the disruptive adaptive message blocker. You will dance like a multiplex!  And speaking of dancing… the fast approaching AC/DC lane MMW performance in Melbourne at CIVIC SOUNDS on NOV 18 […]

Incoming for Melbourne on NOV 18… CIVIC SOUNDS Laneway Party brings together a diverse line up featuring Regurgitator, Nai Palm , RVG , The Bennies , BEC SANDRIDGE and more on Sunday November 18th. Melbourne’s laneway culture is getting amped up and loud for one night only on Sunday 18 November as part of the Melbourne Music […]

REGURGITATOR HEADROXX your way AUGUST 1. “I’d been having trouble sleeping for a few days. Some kind of pressure in my head seemed to be building. It felt like it was filled with bread that was slowly expanding as it soaked up the surrounding fluids. No doctor I went to could give me any answers. […]

WARNING: THIS IS AN ACTUAL STIMULATION! May feature real life actors resembling living people. Please note assault & batteries are not included. Any resulting harm or damage is the responsibility of the abuser. Offenders of the universe beware. Time is now to care. Viewer insurrection assured. Welcome fellow bio-accumulants to the ever-widening waffle world. Go […]

FRI 29 JUNE – melbourne MELBOURNE RECITAL CENTRE REGURGITATOR, SEJA & MINDY MENG WANG ON GUZHENG PERFORMING THE VELVET UNDERGROUND & NICO plus special guests THE ORBWEAVERS All highly saturated in the inevitable exploding visuals as curated by Ken Weston. https://www.melbournerecital.com.au/events/2018/regurgitator-velvet/ The band bring enough live energy and charisma to the production for this tribute project to […]

FRI 4 MAY – alice springs WIDE OPEN SPACE festival MAY 4-6 2018 10 years of music, art and desert culture… Wide Open Space Festival (WOS) has once again shown it is the most “out there” festival in Australia with an incredibly diverse music announcement for their 10-year celebrations. The festival has built a reputation for […]